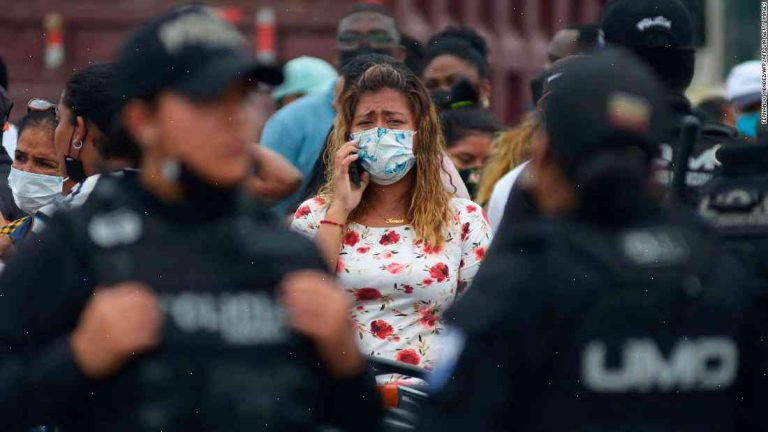 This article is over 4 months old

Ecuador has dispatched aircraft to rescue the bodies of 10 prisoners killed in a riot and gunfire at a remote Caribbean prison after the state-run guard for the prison said 11 inmates have been killed.

The guard, Ruben Darria, said the clashes erupted at 15.00pm on Monday at the Sánchez Pizén prison in the mountainous Central American country, where officials confirmed at least 40 inmates died.

Darria said the dead included 10 inmates and one prison guard.

Rescue helicopters were dispatched to bring the bodies to the capital, Quito, to allow their relatives to hold the funerals according to the wishes of their victims, said National Narcotics Prosecutor Walter Poveda.

Anger over poor prison conditions had galvanised rallies across Ecuador for months, and protests flared again on Tuesday.

The unrest at the Sánchez Pizén facility, near the Colombian border, is the latest in a series of protests in Ecuador that have put pressure on the president, Lenin Moreno.

On Monday evening, a relative of one of the dead outside the prison told Radio Caraqueño that two of the inmates had been decapitated and the rest were shot in the head.

At least 50 inmates managed to escape from the prison during the riot, the prison guard Darria said.

On Tuesday, inmates burned and looted the bathrooms at the jail. Videos on social media showed inmates running around with makeshift shields.

“A small group of inmates isolated themselves and refused to surrender … They are taking up positions and at this moment they are shooting at authorities,” Poveda said in the early morning.

Poveda said 200 inmates were being held inside the prison as authorities transferred 50 to another lockup about 20 miles to the north. He did not say when the transfer would take place.

Gustavo Abenía, a lawyer who represented inmates at the Sánchez Pizén prison, said 11 prisoners had been killed.

There was no immediate confirmation of the death toll.

Ecuador has two main lockups for women and around 7,000 prisoners on average per day.

Long lines of police in riot gear cordoned off the Sánchez Pizén facility as a thick plume of black smoke billowed over the surrounding hills.

“We’re requesting the prisoners at the prison [in] Puerto Ayora, including those suspected of violence, sit down down for calm to return. We’re working on a strategy to return them to prison,” Soliz said.

President Moreno declared a state of emergency and sent government forces to quell the riot.

The Sánchez Pizén prison is located in a remote region near the Colombian border. Photograph: Alfonso Ramos/EPA

Rioting in the area began at about 2pm, hours after authorities announced that 800 of the facility’s 1,200 inmates had escaped during a disturbance at 2am on Monday.

Poveda said the escape was organised by inmates within the same prison unit. Authorities arrived at the prison to find doors opened and doors blocking the entrance to a cellblock, he said.