Image copyright ThaiAEC Mega Office Images Luxury is in store above the skyline of Phuket’s famous Grille Hotel. Since last year, the Siam Reap Convention Centre in Thailand has had two floors covered in… 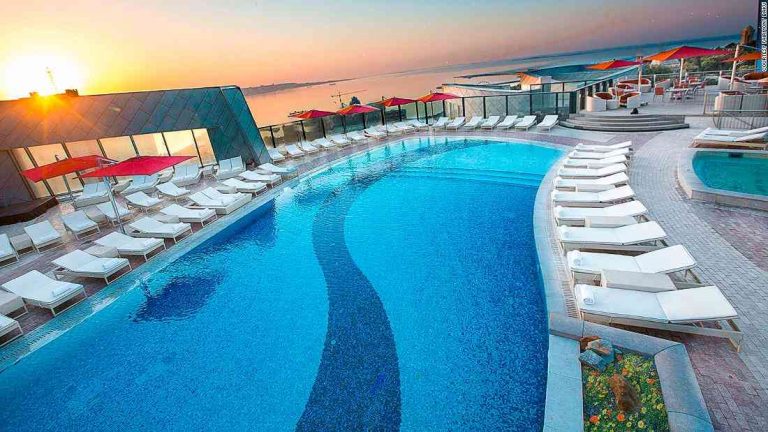 Luxury is in store above the skyline of Phuket’s famous Grille Hotel.

Since last year, the Siam Reap Convention Centre in Thailand has had two floors covered in a luxurious new extended marble-topped structure.

While competitors in the luxury-tower sector struggle with declining sales, the Grille’s expansion may help re-establish the hotel’s quality standing.

After being rocked by lawsuits, spiralling room prices and a drawn-out development battle, the local property market is still recovering.

“Prices have dropped 50% in the last few years, but are now on the rise again,” said expert Oliver Watts, a former professional football player who joined business-suites developer Quinta Arabia in 2015 and is now its sales and marketing director.

“There are also low vacancies,” he added.

The rebranding to the Grille dates back to 2009 and was previously known as City Reap.

The project boasts 1,500 rooms, 200 guest rooms, a spa, five restaurants and bars, a marina and a giant convention hall in the centrepiece building.

The host of projects aimed at a renewed tourism resurgence in Thailand was announced in late 2015.

The three other hotel groups building new complexes in the country’s popular resort area are also hoping to reconnect with hotel-goers after the 2015 anti-government protests.

The Pratunam resort and area near Krabi was the scene of deadly violent clashes in the days preceding and following a military coup that year.

But it’s not only in the resorts areas that new developments are sprouting up.

The holiday resorts of Samui, Phuket and Koh Samui are also seeing an increase in global interest.

“This is the moment that the regional resort market in Thailand is changing and making a comeback,” Mr Watts said.

“The new projects will have more confidence in Thailand’s tourism industry.”

Meanwhile, the hotel sector should also welcome those who take longer with their bookings and demand more value for money.

After nearly two years of waiting, the Grille’s luxury-resort guests can finally enjoy the spoils of the Grille’s $215m (£165m) transformation.

“We are very happy to have everything ready,” Quinta’s Mr Watts said.

“The greatest test is to get feedback on how to handle the flow of the guests.”