TV viewers were in tears Monday when singer Adele stopped by “The Ellen DeGeneres Show” and had an unexpected “visit” with her former high school English teacher. “I want to thank you for making… 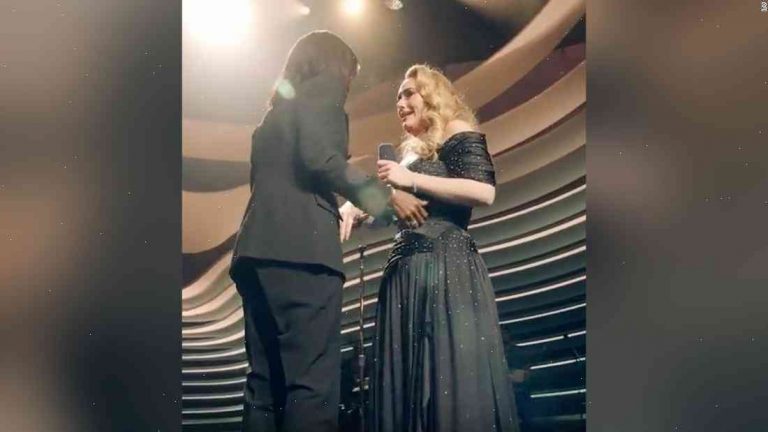 TV viewers were in tears Monday when singer Adele stopped by “The Ellen DeGeneres Show” and had an unexpected “visit” with her former high school English teacher.

“I want to thank you for making me feel like the most important person in the world,” the singer, real name Adele Laurie Blue Adkins, says while sitting in the host’s chair. “I am here because you changed my life and I’m here to say thank you.”

“I did, I did, Ms. Farris,” Adele adds, choking back tears as she’s ushered off stage.

Adele was on the show to promote her new album, “25,” and “Gnomeo and Juliet.” However, when host Ellen DeGeneres asked for details about the tour, Adele’s fans got quite a surprise as Ellen brought out a link to a new website she wrote in memory of the singer’s late mother. It gave a link to Adele’s YouTube channel, where she shared a video to close out the show.

“When you get to age 26 you probably think you’re going to be an adult, and you’re not. Because even at 26, I still sat down with my second language until I was 12,” Adele said. “I am constantly growing and learning.”

While Ellen comforted the singer, the teacher was left dumbfounded. “What is going on? Why is she crying, is she drunk?” the staff member said.

Ellen explained that Adele had remembered her from school, and suggested that they meet in person to return the favor. “You really did change my life,” Adele shared.

“I have the most amazing mother, they’re the greatest of them all. Thank you very much. Go Adele!” the teacher yelled as she climbed down from the stage.

Ellen thanked her for his service, calling his time as a teacher “probably the best job in the world.”

“I can’t believe it’s you!” the teacher said after she left.

The songstress’ video on the Ellen site ends with the line, “Please watch in 10 years.”

The Wheel of Time – a fantasy world made of 47 laws