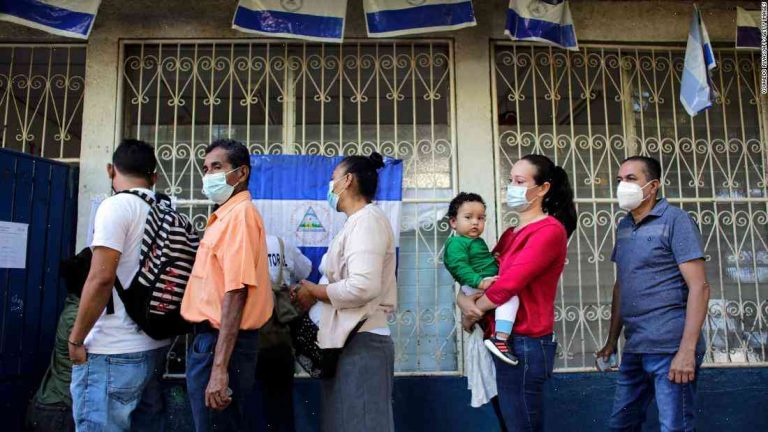 Nicaraguan President Daniel Ortega has won his third consecutive election in a poll labelled a “parody” by observers.

The United States described the vote as “nonsensical” while the European Union said there had been no improvement from the previous vote.

The FSLN expects the new constitution will boost economic growth.

Sunday’s general election was the first since a new constitution was adopted, designed to enhance Mr Ortega’s hold on power after a failed attempt at a voluntary handover in 2013.

There were 16 candidates in the presidential race, with Mr Ortega’s wife Rosario Murillo running for vice-president on the FSLN ticket.

Mr Ortega said he had been “pleased with the enthusiastic votes” in Sunday’s election and that the constitutional changes had “made the process more transparent and participative”.

The FSLN picked up many votes by targeting the nation’s poor and those who made up the country’s “typical” voters,

Commenting on Mr Ortega’s victory, the EU said there had been no improvement in the “electoral environment” since the last general election.

“The continued political and social exclusion of certain social groups, the huge gap between the rich and the poor, and the repeated violation of the right to form and join social movements make the elections a parody,” it said.

“This has been evident from the very start, in particular since the electoral start in September.”

The US said it was disappointed with the result and that the electoral system was “wholly inadequate”.

“The use of the old electoral system, especially the various means of manipulation, has marred what could have been a very promising year in the democratic transition process,” a spokesman for the State Department said.

US Assistant Secretary of State for Western Hemisphere Affairs, Alejandro Wolff, said that he was “deeply disappointed” by the polls.

Sunday’s vote was the first parliamentary election since the elections in 2009, when violence erupted between rival supporters of Ortega and challenger Daniel Berrios.

In recent years, Nicaragua has experienced riots, protests and political unrest during fights over land, land use and the national budget.

US threats of sanctions have also been sparked by a commitment to return to socialism after the country’s 1979 revolution.