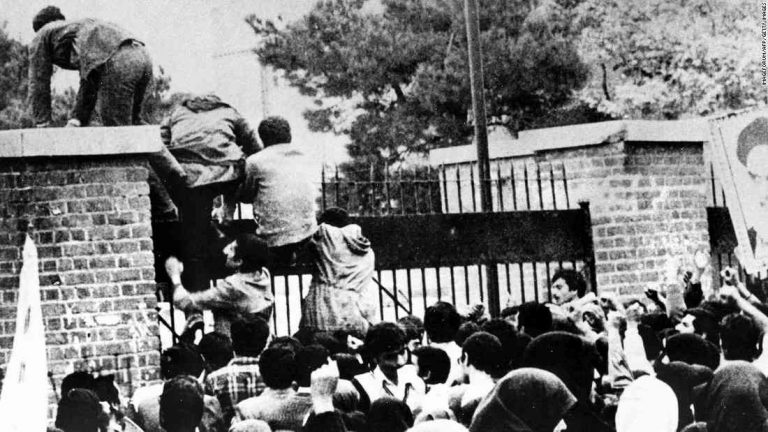 For nearly three years, hostage negotiators held secret talks with Iran in an effort to free 56 Americans held captive by the Islamic Republic.

Feb. 18, 1981, 52 American hostages are released from the U.S. Embassy in Tehran. Many were released because of the bargaining power of the United States. Two CIA operatives are given safe passage out of Iran because the U.S. knew that negotiations were under way, and the pressure for the rest of the hostages to leave was dropping. One of the U.S. hostages, Richard Downes, a businessman, wrote a secret diary about his experience for National Geographic magazine.

Jan. 19, 1981, Ayatollah Ruhollah Khomeini calls off the negotiations and swears to eradicate the US from the Middle East.

Feb. 10, 1983, Iranian students storm the U.S. Embassy in Tehran and hold 52 hostages, and American officials agree to release two Iranian diplomats held in U.S. custody. Two of the Iranian diplomats, Khosrow Afghahi and Massoud Shadjareh, are given safe passage out of Iran because the U.S. knew that negotiations were under way, and the pressure for the rest of the hostages to leave was dropping. Two of the U.S. hostages, Richard Downes and John Risley, recce their respective rooms before leaving the building. (Photo by Jorge Rey/AFP/Getty Images)

March 16, 1983, Iran released the last 12 Americans in a successful rescue attempt. Thirty-six more Americans would die during the standoff.

Following negotiations and a ceasefire in Lebanon, the U.S. designated Quds Force commander Hossein Ali-Majid as the country’s third major enemy, joining Iraqi dictator Saddam Hussein and Hezbollah terrorists. He would ultimately bear the brunt of public anger for the hostage crisis.

Ambassador Hugo Chavez, left, listens as Ayatollah Khomeini addresses the nation on the release of U.S. hostages on March 20, 1983. (Photo by Trandull Carlin/AP)

In 1993, American TV evangelist Pat Robertson began hosting a series of weekly “Countdown to Armageddon” radio broadcasts in which he laid out plans for “a large-scale war on international terrorism” and put responsibility for ending the Israel-Palestine conflict on Iran, Hamas and Hezbollah, as well as the Syrian government. American politicians who spoke on the show included Rudy Giuliani, Robert Dole, Richard Lugar and Newt Gingrich.

In July 1993, the U.S. introduced new sanctions against Iran for its support of international terrorism.

In 1998, Iranian President Mohammad Khatami met with U.S. President Bill Clinton and Prime Minister Tony Blair to discuss the release of American hostages in Lebanon. After two days of negotiations, Iran and the U.S. agreed to set up a joint working group to settle issues related to the hostages.

On April 30, 2005, Iran agreed to lift all of its cultural and financial sanctions against the U.S. as well as its support for terrorist groups. However, subsequent U.S. sanctions for supporting Iranian nuclear activities continue to ban most trade with Iran.

On July 21, 2005, Secretary of State Condoleezza Rice announced that the U.S. would not demand or accept any conditions before Iran would drop its nuclear program and provide unfettered access to nuclear scientists. However, in his first public speech as president, Mahmoud Ahmadinejad said, “The nuclear issue is not negotiable. The world cannot tolerate a nuclear Israel.”

On September 22, 2009, Ahmadinejad attempted to open a branch of Swiss bank Credit Suisse in Tehran, but was prevented from doing so by security forces. The threat of prosecution for the bank’s own involvement in Iran’s nuclear program fueled widespread anger with the bank. The bank’s U.S. branches were forced to close by the U.S. Treasury Department on Dec. 2, 2012. The bank’s global networks were closed in early January 2014.