Washington advances to 3rd round

(SportsNetwork.com) – Marques Bolden’s 18 points and Washington scored 20 points in the final period to down Albany 86-61 on Saturday in the second round of the NCAA Tournament. Jordan Mathews poured in 16… 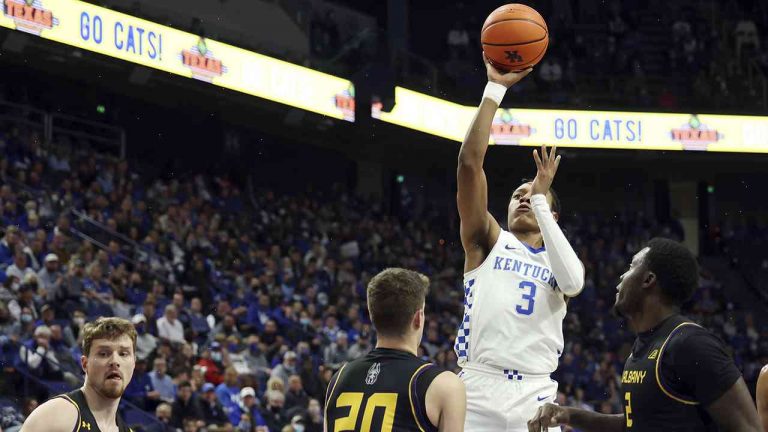 (SportsNetwork.com) – Marques Bolden’s 18 points and Washington scored 20 points in the final period to down Albany 86-61 on Saturday in the second round of the NCAA Tournament.

Jordan Mathews poured in 16 points and Nahziah Carter added 14 points and five assists for the 10th-seeded Huskies (24-12), who advanced to the third round of the East Region where they will face third-seeded Syracuse on Monday.

“That was probably the best win in two years,” Washington coach Mike Hopkins said. “We played as well as I’ve seen us play in a long time. I’m very proud of the way our guys played.”

The Huskies had just eight total turnovers in the game, which Hopkins credited to solid ball-handling and just quick enough hands.

The Great Danes led 24-20 with 9:41 left in the first half when Washington rattled off seven straight points to take its first lead since the opening minutes.

The Huskies never trailed again and eventually had their largest lead of the night at 31-23 on MiKyle McIntosh’s 3-pointer.

The Great Danes countered with 11 unanswered points, cutting Washington’s lead to 37-34 on a pair of Southerland free throws before McIntosh made a pair of free throws to give the Huskies the lead back at 39-34 with 3:25 left.

Washington scored the final six points of the half, giving the Huskies a 46-37 advantage into the break.

“I think we were a little tight early in the first half. We weren’t playing as physical as we needed to,” Albany coach Will Brown said. “We were struggling to get stops at the defensive end and it affected the offensive end. They were getting shots in some of their sets where they were being pretty aggressive, driving the lane a little bit more and crashing the boards.”

Wes VanBeck and Carter each scored a basket during a 10-0 Washington run to open the second half and the Huskies took a 58-44 lead on McIntosh’s layup with 17:25 to play.

There was no more fighting from Albany as the Huskies extended their lead to 76-54.

NOTES: Washington last advanced to the third round of the NCAA Tournament in 2015, when it lost to No. 2 Arizona, 73-58 … The Huskies went 1-1 against Albany during the regular season, with a 57-55 victory at home on Jan. 21 and a 74-63 loss in Albany on Feb. 6. … Albany had its 10-game winning streak snapped … Albany was the No. 11 seed in the NCAA Tournament. The Great Danes played in their first round game in their fifth appearance overall. They are 2-3 in their previous five.