The median between Chicago’s Cermak Road and State Street, where the video was taken, shows a hardened concrete barrier as cars begin to drive along the street. Residents along that road have for decades… 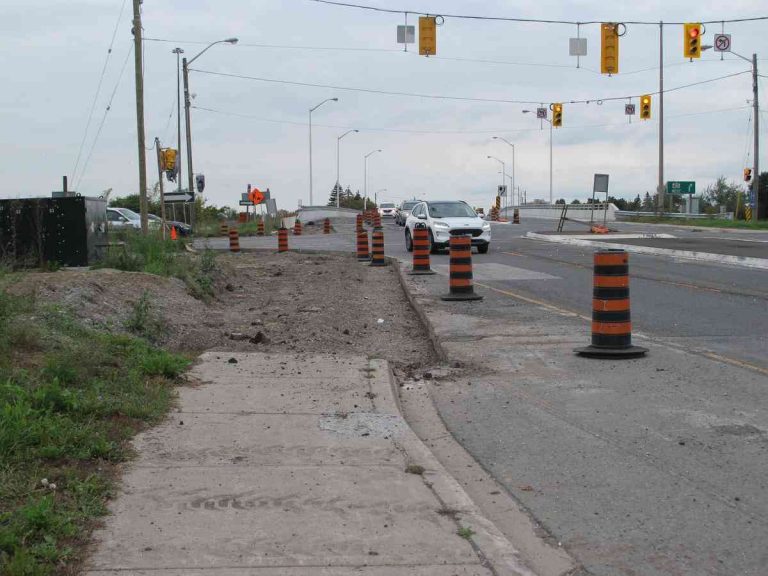 The median between Chicago’s Cermak Road and State Street, where the video was taken, shows a hardened concrete barrier as cars begin to drive along the street. Residents along that road have for decades have complained about potential damage to vehicles, especially on the back end, when accidents and unruly behavior occur in that space, but for a time in recent years the pavement was widened and more signage was installed, residents said. It was like a continuous slope, to allow more space for traffic, rather than the usual level of most sidewalks, the residents said.

This scene went viral on social media. A newly opened highway near downtown Chicago is producing video of a mad scramble at a packed intersection as cars slowly pass a pavement that abruptly ends in front of a crowd.

Photojournalist Matthew Arnold’s video was taken Thursday in the area of Cermak Road and State Street, where drivers have had to wait out one of the biggest accidents in city history as barricades go up around a bridge.

Arnold and his wife, Andrea Fik, both say they’ve seen all kinds of mayhem in the area, but Arnold said he’s never seen anyone stand still for as long as this woman did.

“It was absolutely crazy,” he said. “People all over the place like a pile-up — there’s no way to go fast. People were jockeying for position.”

Arnold, who works for Express Bike Chicago, used his cellphone to document the chaos.

“It’s a very large number of cars that have to slow down, so the vehicles at the end of the block are not even in the position to get the same people who were crossing the street in time,” he said.

“I’ve lived here for a year and I’ve seen a lot of erratic driving in the area,” Fik said. “There’s lots of pedestrian traffic on State Street and this sidewalk is kind of tucked in just before it runs out. Cars just pass people sitting there. … It happens at least once a week.”

But the most frightening moments he saw were when a vehicle went through a red light, accelerating through some dirt in the middle of the intersection.

“That was the time I was shocked — just this big giant car going through that intersection,” he said. “We’re talking, you’re talking possibly 40 miles per hour, plus the blacktop, and what you think was a pedestrian is just a gigantic car careening down.”

The video was posted to Facebook, where it’s already been viewed over 5,000 times.

Metro spokesman Marc Magliari said at about 5:22 p.m. Friday, the derailment of a Calumet Express train stopped in a no-passing area at State and Cermak Road. The southbound train from Des Plaines was stopped after it hit a snow plow on Cermak Road, Magliari said.