Some national and regional executives of the ruling New Patriotic Party on Sunday stormed the Akwatia Constituency in the Eastern Region for a unity walk as victory appear uncertain for the party in December.

Spotted among the dignitaries were Kennedy Ohene Agyapong, Member of Parliament for Assin Central, Sammy Awuku, National Organizer of the NPP, and the National Women’s Organizer Kate Gyamfua.

The walk saw multitude of NPP supporters participating but conspicuously missing was the embittered Member of Parliament for Akwatia Mercy Adu Gyamfi popularly known as Ama Sey who was expected to participate in the event to demonstrate reconciliation and unity. 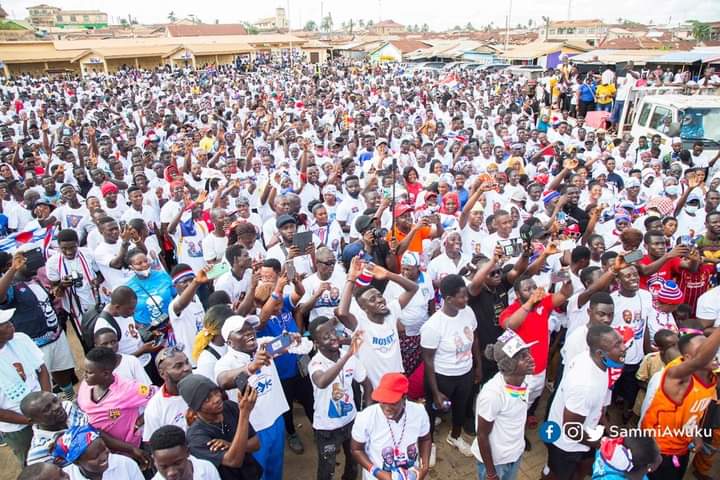 It is not clear why the MP did not show up. Her mobile phone has since been off.

Firebrand Ohene Agyapong addressing the supporters said they were expecting the MP and her husband to participate in the walk having reached out to them in the house.

Nonetheless, Kennedy Agyapong advised the Parliamentary Candidate Ernest Kumi to Personally go to the MP to beg her for advice on how she managed to gain grounds in Akwatia and learn from her if he wants to be successful in his political career.

On October 9, 2020 the incumbent Member of Parliament for Akwatia, Mercy Adu Gyamfi popular known as Ama Sey officially announced her withdrawal from the parliamentary race as Independent Candidate.

The MP was expected to file her nomination form but rescinded her decision stating that she has been spoken to by many dignitaries including President Akufo Addo and wife Rebecca Akufo Addo, Okyenhene and some Pastors.

“I petitioned the NPP for recounting after the Primaries but they ignored it however they did recounting for a candidate at Asamankese, my supporters got angry and decided to support me to contest as Independent Candidate because the party was not fair to me. My supporters were angry. I agreed to go Independent because I was bitter however many people called me,” she said at a press conference Friday at Akwatia.

She added ” President Akufo-Addo called me, his wife called me, Chief of staff called me, Okyenhene, Juabeng Chief, Pastors and many other dignitaries called to speak to me. So I have decided not to file my nomination form as EC closes filing today”.

“It is painful to be cheated and if pains are afflicted on you and you don’t take the decision to prevent it will continue but because I have been spoken to I have decided to remain calm and rescind my decision. I know many are still angry in Akwatia I beg them to let bygones be bygones”.

The Member of Parliament for Akwatia Mercy Adu Gyamfi had earlier boycotted a mini-rally held for President Akufo-Addo during his visit to Akwatia as part of his four-day campaign tour of the Eastern region.

Supporters of the MP chanted war song to demonstrate their displeasure soon as the NPP Parliamentary Candidate Ernest Kumi mounted the platform to address them in presence of President Akufo Addo and his entourage.

Set up neutral body for electoral reforms – Mahama to EC