The International Criminal Court (ICC) is considering whether to investigate human rights abuses in Venezuela that human rights groups have suggested amount to crimes against humanity. The court announced Saturday it is opening a… 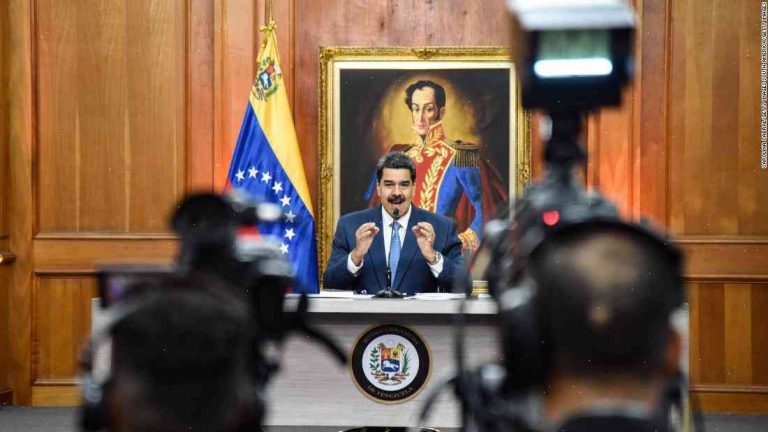 The International Criminal Court (ICC) is considering whether to investigate human rights abuses in Venezuela that human rights groups have suggested amount to crimes against humanity.

The court announced Saturday it is opening a preliminary examination of the violence and abuses in Venezuela, pending “proof of an alleged international criminal liability and request for authorization to carry out an investigation.”

Violence in Venezuela in recent weeks has left 124 people dead and hundreds injured, according to Human Rights Watch, a New York-based non-governmental organization.

Though Venezuela has long been known for political violence, courts have long refused to open a case because of alleged political bias among judges. That changed in October when the conservative government of Venezuelan President Nicolas Maduro was charged with barring opposition figures from running for office, in a case that could also be considered political abuse.

Maduro fired back, denouncing the U.S. court action as a “campaign of lies” that sought to destabilize the country and undermine his government.

He also announced Saturday that he will renounce his right to immunity from prosecution in the matter.

As part of its decision to open the preliminary examination, the ICC said it was “seriously concerned” by reports that security forces used excessive force against protesters and intimidation against those who criticize the government.

“Cases also arise out of allegations of violations of the right to freedom of peaceful assembly and expression,” the court said in a statement.

The preliminary examinations are the first stage in a process that can last up to four years and could eventually lead to an eventual trial. The hearings will be held in The Hague, Netherlands.

“During the investigation, the Chamber will carry out a review of a large volume of requested evidence,” the court said in a statement. “It may also analyze the current conditions in Venezuela and seek advice from experts before reaching its conclusions.”

Venezuela’s Foreign Ministry vowed in a statement to continue working to ensure the people of Venezuela have “freedom, democracy and human rights.”

Alexandre Murillo, Venezuela’s consul general in Washington, said in a statement that the government of Venezuela is willing to “work with the international community to combat violence and protect human rights.”

Despite Maduro’s tough talk, the actual decision to question the government was taken after U.S. State Department officials drafted and submitted a confidential memo to the court on Oct. 23 that cited the U.S. accusation that the Venezuelan government used its feared intelligence agencies to manipulate the courts.

“In a highly political environment, the Venezuela state is enacting measures to weaken its institutions and stifle dissent,” the U.S. government said in its memo.

“The primary objective of this government has been to extinguish free and honest speech and to intimidate and coerce civil society,” it added.

Venezuela could be the first country to be investigated by the court for human rights abuses since it was formed as a permanent institution of the U.N. in 2002.

The dispute over the past few weeks has seen Venezuela criticize the ICC on Twitter, call it a “profit-motivated attack” on the left-leaning South American country, and publish numerous reports criticizing the court’s handling of cases against some governments in Africa.

“The Prosecutor risks having a role only in prosecuting the countries that refuse to investigate themselves,” Venezuela said in one recent report.

As the debate heats up, the situation inside Venezuela appears to be worsening.

On Friday, the International Committee of the Red Cross (ICRC) issued a statement urging aid organizations to scale back operations in Venezuela as violence continues.

Johannes von der Schulenburg, ICRC Director General, called for “a harmonious end to the violence” and said a resumption of aid operations is possible only with approval from the Venezuelan government.

The ICRC, the international organization responsible for medical personnel, said the scarcity of medicine and supplies is one of the primary reasons for the conditions affecting Venezuelans.

The group also said it remains open to consider other humanitarian issues that might require it to work in Venezuela, such as housing, electricity, food, cash and health care.

The Associated Press contributed to this report.