Image copyright Shots of the Trnava bus fire Around 46 people have died in a bus fire in rural Bulgaria, state media says. Some 70 passengers were on board when the burning bus jumped… 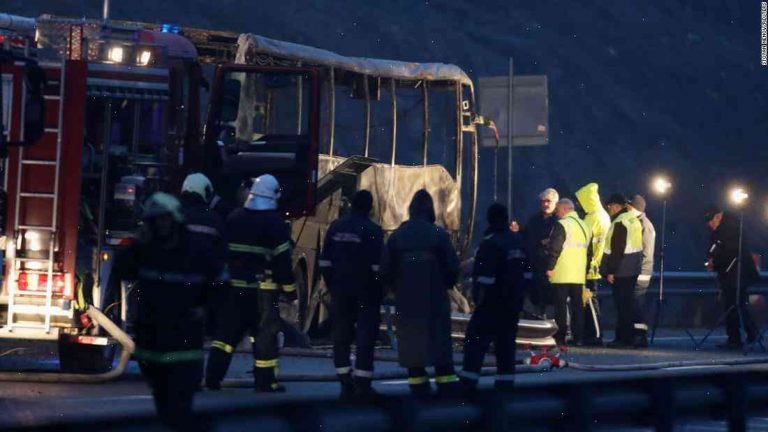 Around 46 people have died in a bus fire in rural Bulgaria, state media says.

Some 70 passengers were on board when the burning bus jumped a barrier and fell into a river, and the bodies were found after a two-day search by divers.

The bus was returning from a tourist camp near Bulgaria’s border with Romania when it caught fire on Tuesday.

Eight people, including two children, were rescued on Tuesday.

“Sixteen of the passengers who had been rescued yesterday died at hospitals this morning. The remaining bodies were discovered shortly before 12:00 local time [18:00 GMT] during the search,” said the Bulgarian state-run news agency, Tanjug.

The bus jumped a barrier near the town of Trnava and fell into the river some 40km (25 miles) downstream, local radio reported.

Rescuers and divers discovered the charred bodies shortly before 13:00 local time [13:00 GMT] on Wednesday, according to Tanjug.

More than 220 people have died in Bulgaria in bus and train accidents since 1990, according to the website SOS-Bulgaria.

The last time Bulgaria suffered a bus fire that claimed many lives was in 1997, when 51 people died in a blaze on a packed coach that was on a trip from Hungary to Budapest.

Boots Black Friday 2017 deals: everything you need to know